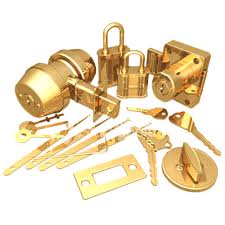 It is the mechanism of cylinder locks that makes them special and also, dependable. As their name implies, such locks have a cylinder – this is actually their main component. This is where you put the key to open or lock the door. This is the part of the lock you don’t see because it is hidden in the door’s cavity. While there are variations among mortise locks, deadbolts, Euro cylinders and other types, they all have one thing in common. They have some form of a cylinder.

Inside a cylinder lock – how it works

There’s also a revolving cam, which rotates along with the key. And there are also some pins – no wonder cylinder locks are also known as pin tumbler locks. The pins of a deadbolt, for example, are placed in such a configuration as to be at different lengths and perfectly match the key cut for this particular door lock. And so, when you put the key in the lock, you actually put the key in the cam of the cylinder and what happens is that the pins move to make room for the perfectly made key to pass and move all the way in before it turns.

At times, when you put the key in the lock and feel that it turns without control and without unlocking the door, what happens is that the cylinder is detached or broken and moves along with the key. That’s bad news and certainly, calls for lock repair.

There are also all sorts of tiny components, like springs, inside the cylinder that make the key insertion and movement, and the door unlocking and locking possible.

Security, the bolt, the thumbturn 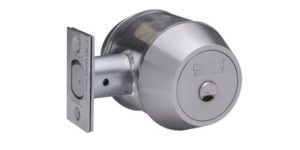 The thumbturn or button often found on the inner part of the door does a similar job with that of the key. It locks. It just does the job much faster. All the same, the difference in the level of security is done by the bolt. And whether or not this is a deadbolt. And also, how long it’s the bolt. You see, the simplest locks – those that are usually used for low-risk applications usually contain a regular latch. No wonder deadbolt locks became the number one choice for higher security. They integrate a durable cylinder mechanism and a bolt that often is long and so, secures at the opposite part of the door (on the strike plate) better.

Clearly, finding a lock replacement is not easy. Choosing the right cylinder lock for a specific door is also not easy. It’s not just the variety of door locks that make such a choice hard but also the variations in bolts too.

To sum things up, cylinder locks are broadly used and in fact, the most popular high security door locks are deadbolts. But you must know what you need.